One light novel and 20 manga titles are expected to be released this week according to the lists published by PREVIEWSworld.com. Yen Press releases 9 titles, Viz Media 6 titles, Digital Manga 4 titles and Kodansha USA only 1 title. Here’s the complete list: 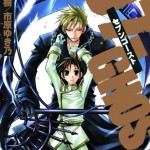 07 Ghost vol 1[Viz, 2012.11.14, $9.99] 07 Ghost All Teito Klein wants is to forget his murky past as an orphan and slave and to graduate from Barsburg's military academy with his best friend Mikage. But when an overheard state secret triggers treasonous memories, he's forced to flee from the very empire he once sought to defend! 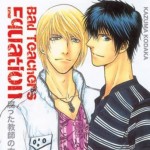 Bad Teacher's Equation vol 5[Digital Manga, 2012.11.14, $19.95] Kusatta Kyoushi no Houteishiki Atsushi's growing up faster than anyone can believe! What happened to the sweet, determined boy who'd do anything to catch the eye of his one-and-only? With college now rapidly approaching, he's got one last chance to make his heart's deepest desires known. Will he get the gorgeous graduation gift he's always wanted? 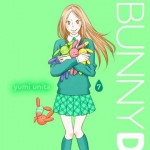 Bunny Drop vol 7[Yen Press, 2012.11.14, $13.99] Usagi Drop Going home for his grandfather's funeral, 30-year-old bachelor Daikichi is floored to discover that the old man had an illegitimate child with a younger lover! The rest of his family is equally shocked and embarrassed by this surprise development, and not one of them wants anything to do with the silent little girl, Rin. In a fit of angry spontaneity, Daikichi decides to take her in himself! But will living with this overgrown teenager of man help Rin come out of her shell? 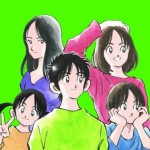 Cross Game vol 8[Viz, 2012.11.14, $14.99] Cross Game The Seishu Gakuen baseball team is one win away from fulfilling Wakaba's final dream of seeing Ko pitch in front of a packed crowd at Koshien. But they'll have to beat powerhouse Ryuou Gakuin in the North Tokyo Tournament finals in order to get there. Meanwhile, Akane Takigawa's health takes a turn for the worse, and she's scheduled to have surgery... on the day of the big game. 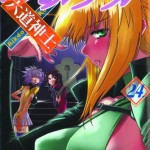 Excel Saga vol 24[Viz, 2012.11.14, $9.99] Excel Saga Excel cannot long survive in the artificial body of Isshiki; the tragedy is that she has no incentive to leave it, as she’s finally the faultless servant of Lord Il Palazzo she’s dreamed of being. By contrast, Iwata seems to have made a recovery under Matsuya’s care - but in coming back to his old self, he tells her secrets beyond what a lover would. And Miwa makes her next move by revealing a few things her son has kept to himself. They say a little knowledge is dangerous - and if it’s in the hands of Umi...? 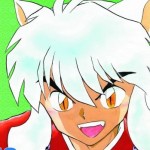 Inu Yasha (VizBig Ed) vol 13[Viz, 2012.11.14, $17.99] Inu Yasha To get the drop on Naraku, Kohaku hides the fact that he has recovered his memory. But can he handle the knowledge of the evil he has committed while in Naraku's thrall...? When Inuyasha and his allies become locked in combat with Hakudoshi, their erstwhile enemy Kagura fights by Inuyasha's side. Can she be trusted...? Then, while Naraku and Midoriko seek to capture Koga and Kohaku and rip the Shikon Jewel shards out of their bodies, Inuyasha and the gang stumble across a sword with intriguing powers. Could this new weapon be the key to a definitive victory...? 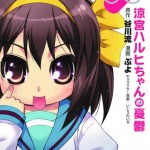 Melancholy of Suzumiya Haruhi-chan vol 6[Yen Press, 2012.11.14, $11.99] Suzumiya Haruhi-chan no Yuuutsu As if he doesn't have enough to deal with during the day, Kyon's dreams are becoming a regular haunt for his SOS friends! Once again, lucky(?) omens hawk, eggplant, and Mount Fuji (played respectively by Tsuruya, Nagato, and Koizumi) make an appearance, but their promises of fortune never seems to play out for Kyon. All he ever gets is more of Haruhi-chan's antics! You'll find plenty of gags and guffaws as Haruhi dives into the world of four-panel and short comics! 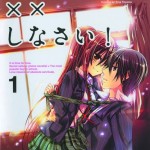 Missions of Love vol 01[Kodansha USA, 2012.11.14, $10.99] Watashi ni xx Shinasai! In school, Yukina is a cold and distant girl; Shigure is the most perfect, good-looking guy. But the two of them have a secret, and their extraordinary "love affair" is about to start! Yukina, under the pen name "Yupina," is actually a popular cell phone novelist. When she discovers Shigure's devious womanizing ways, she blackmails him to complete daring "missions of love" for her to write about. Will these missions give them an opportunity to fall in love with each other? 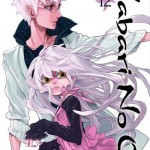 Nabari No Ou vol 12[Yen Press, 2012.11.14, $11.99] Nabari No Ou Apathetic schoolboy Miharu Rokujou is content to meander through life in the sleepy village of Banten. But his quiet existence is shattered when the Grey Wolves of Iga, a powerful ninja clan, attempt to kidnap him in broad daylight. Only then does Miharu discover that the ultimate power of the hidden ninja realm is sealed within his body. As battles erupt among rival ninja clans seeking to control him, Miharu must overcome his apathy and learn the ways of the ninja if he wants any shot at survival! 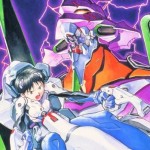 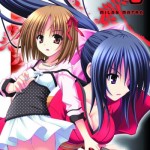 Omamori Himari vol 09[Yen Press, 2012.11.14, $11.99] Omamori Himari Severely allergic to felines, Yuuto Amakawa spends his mornings nursing a drippy nose courtesy of his friend Rinko's cat. But on his 16th birthday, it's not just Rinko's pet that's riling up his allergies (to say nothing of his hormones)! Appearing before him is Himari, a buxom, sword-wielding cat spirit in human guise, who has sworn to protect Yuuto, now the target of vengeful spirits! It's clear that Yuuto's allergies are the least of his problems - he's gonna need Himari's help if he wants to live to see his 17th birthday! 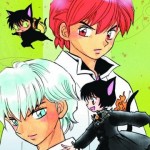 Rin-ne vol 10[Viz, 2012.11.14, $9.99] Kyoukai no Rinne The Shinigami Ageha caught more than she bargained for when she tried to set a trap for her troublesome Black Cat by Contract, Oboro. Now Rinne has to try and capture a giant mongoose spirit and settle Ageha and Oboro's contract dispute! 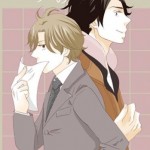 Secret Thorns[Digital Manga, 2012.11.14, $12.95] Himitsu no Toge Sly and sexy Hisahara is a hotshot writer who always runs the show! But what will happen when his ex-lover, the soft-spoken Uruno, signs on as his editor? Should the pair fan the flames they put out a year before...or leave the ashes alone? 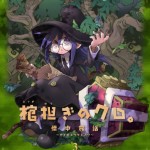 Shoulder a Coffin Kuro vol 03[Yen Press, 2012.11.14, $11.99] Hitsugi Katsugi no Kuro - Kaichu Tabi no Wa With Nijuku and Sanju in tow, the road winds on for Kuro and Sen. During a lull en route, Kuro takes a turn down memory lane, revisiting an unfortunate incident during her early days as a traveler that resulted in her imprisonment! One by one, the secrets surrounding Kuro and her journey with Sen are disclosed - and the fate that Kuro will suffer should her quest fail is revealed! 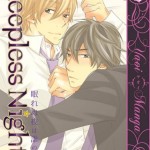 Sleepless Nights[Digital Manga, 2012.11.14, $12.95] Nemurenu Yoru wa Dare no Sei Miyabi can't stand "homos", while Shuuhei is a gay man through and through. They first meet casually, but their second encounter is as roommates in a men's dorm? Miyabi find himself disgusted yet fascinated by the situation. Slowly the two become closer, and while their attraction is innocent, Miyabi can't bring himself to understand Shuuhei's philosophy that "love and sex are two different things" 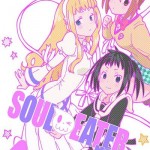 Soul Eater Not vol 02[Yen Press, 2012.10.30, $11.99] Soul Eater Not Ding-dong! DEAD-dong! Class is about to start, and you don't want to be late on your first day of school! Join new student Tsugumi Harudori in the NOT class as Death Weapon Meister Academy, a school dedicated to training transforming Weapons like Tsugumi and the Meisters who wield them. Tsugumi is super-nervous about enrolling at DWMA - and even more nervous about choosing her partner! 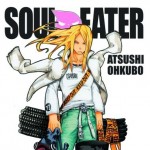 Soul Eater vol 11[Yen Press, 2012.11.14, $11.99] Soul Eater Maka is a weapon meister, determined to turn her partner, a living scythe named Soul Eater, into a powerful death scythe - the ultimate weapon of Death himself! Charged with the task of collecting and devouring the tainted souls of ninety-nine humans and one witch, Maka and her fellow meisters strive to master their weapons as they face off against the bizarre and dangerous minions of the underworld. But the meisters' own personal quirks may prove a bigger obstacle than any sultry enchantress! 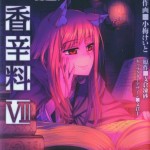 Spice and Wolf vol 07[Yen Press, 2012.11.14, $12.99] Ookami to Koushinryou As Lawrence and Holo put the final phase of their plan to extricate themselves from the jaws of financial ruin into motion, they are confronted by an unforeseen obstacle. With the wolves at the door - both figuratively and literally - can the travelers keep their wits about them and come out ahead of the pack? 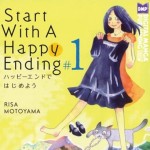 Start With A Happy Ending vol 01[Digital Manga, 2012.11.14, $12.95] Happy End de Hajime You If you had 7 days to do whatever you wanted before your spirit is sent to heaven, what would you do? How about becoming a cat for 7 days..? Start With a Happy Ending is a heartfelt story about cats and the preciousness of life. 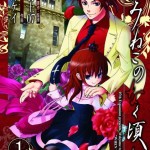 Umineko When They Cry Episode 1: Legend of the Golden Witch Vol 01[Yen Press, 2012.11.14, $18.99] Umineko no Naku Koro ni Episode 1: Legend of the Golden Witch Each year, the Ushiromiya family gathers at the secluded mansion of its patriarch, the elderly Kinzo. It has been six years since Battler joined his cousins at the annual event, but their happy reunion is overshadowed by worsening weather and an eerie premonition from his youngest cousin. When their parents' conversation turns to the division of the inheritance upon Kinzo's imminent death, Battler and his cousins reminisce about the stories their parents teased them with as children-tales of the witch, Beatrice, who haunts the island's forest. But when people start dying unnatural deaths, Battler can't help but wonder. 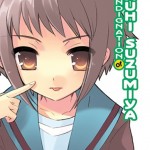 Indignation of Haruhi Suzumiya (Haruhi Light Novel 8)[Yen Press, 2012.11.14, $15.99 (Hard Cover), $8.99 (Soft Cover)] Suzumiya Haruhi no Fungai Haruhi's escapades continue in two new short stories! In the first, "Editor in Chief," Haruhi must save the SOS Brigade from being disbanded by the school. She has to prove that they are a legitimate literature club by publishing a collection of essays and stories. Naturally, Haruhi takes charge as editor in chief. In "Wandering Shadow," Haruhi and the gang take on the spirit world when they investigate the haunting of a local dog walk. Will the group need to perform its first canine exorcism? Anything can happen when Haruhi is around!